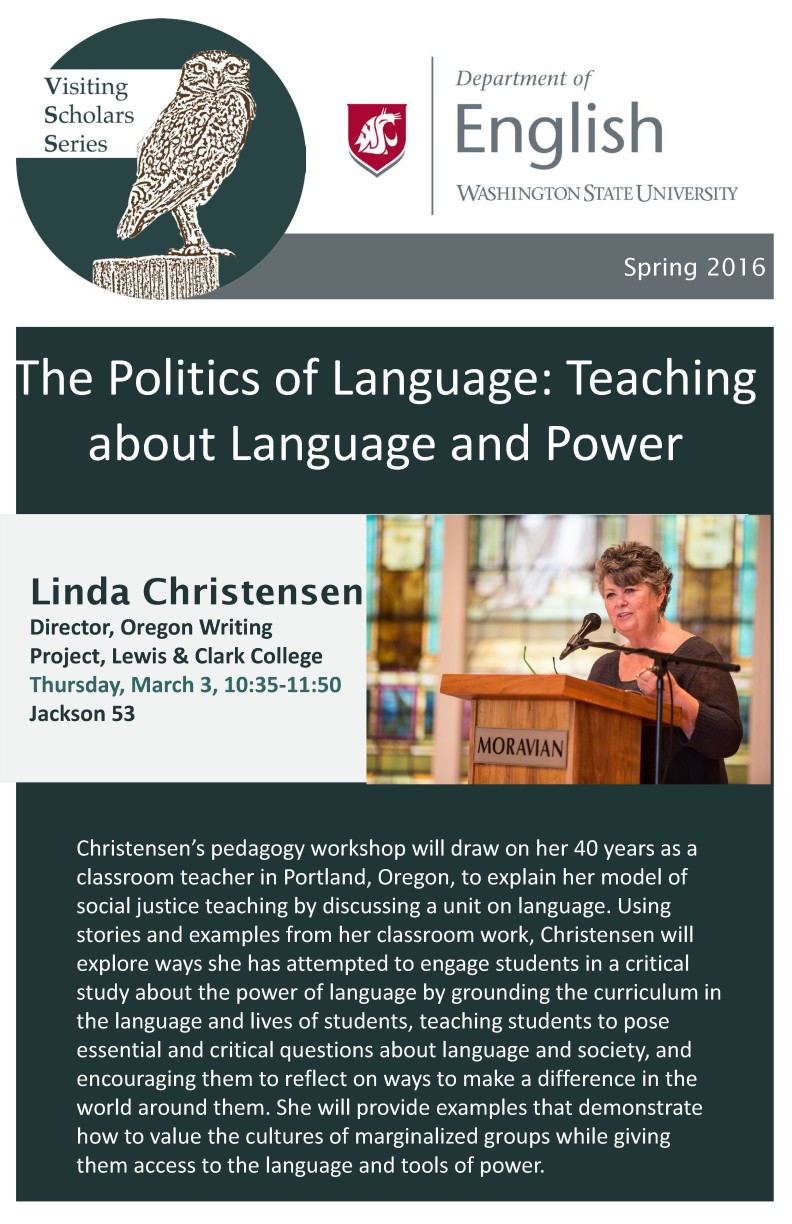 Linda Christensen is the Director of the Oregon Writing Project (OWP), located in the Graduate School of Education at Lewis & Clark College. She’s the author of Reading, Writing, and Rising Up: Teaching about Social Justice and the Power of the Written Word and Teaching for Joy and Justice: Re-Imagining the Language Arts Classroom. She has given keynote addresses at local, national, and international conferences about her work on literacy and social justice. She taught high school Language Arts and worked as Language Arts Curriculum Specialist for thirty years in Portland, Oregon. She is a member of the Rethinking Schools editorial board. She has received numerous awards, including the Fred Heschinger Award for use of research in teaching and writing from National Writing Project and the U.S. West Outstanding Teacher of Western United States and most recently, the Humanitarian Award from Willamette Writers.

Wednesday, March 2, she will give a professional development colloquium at noon in Bundy: “Writing Towards Justice”
In this talk, she will discuss the noisy intersection between competence and correctness as first generation students navigate their way through college. How do they learn to code-switch from home language to the language of the academy? How can they keep an authentic voice and write with power and confidence?

Thursday, March 3, she will give a pedagogy workshop 10:35 to 11:50 in Jackson 53: “The Politics of Language: Teaching about Language and Power”

Her workshop will draw on her 40 years as a classroom teacher in Portland, Oregon, to explain her model of social justice teaching by discussing a unit on language. Using stories and examples from her classroom work, Christensen will explore ways she has attempted to engage students in a critical study about the power of language by grounding the curriculum in the language and lives of students, teaching students to pose essential and critical questions about language and society, and encouraging them to reflect on ways to make a difference in the world around them. She will provide examples that demonstrate how to value the cultures of marginalized groups while giving them access to the language and tools of power.

Reginald A. Wilburn is Associate Professor of English at the University of New
Hampshire and author of Preaching the Gospel of Black Revolt: Appropriating Milton in
Early African American Literature, which theorizes African Americans’ subversive
receptions of John Milton, England’s epic poet of liberty. Wilburn examines Miltonic
presence in the works of diverse writers from Phillis Wheatley and Frederick Douglass,
to Frances Harper, Anna Julia Cooper, and Sutton E. Griggs.

Gregory Eiselein is Professor of English at Kansas State University, Coffman University
Distinguished Teaching Scholar, and Director of Kansas State University’s first-year
experience program. He is the editor or author of six books, including Literature and
Humanitarian Reform in the Civil War Era. Eiselein examines how literary
understandings of the relationship between emotion and ethics changed during the
nineteenth century. What role did the work of William James play in these changes? How
and why might this work matter to us now?

Jacqueline Rhodes is Professor of English at California State University, San
Bernardino, author of Radical Feminism, Writing, and Critical Agency: From
Manifesto to Modem, and co-author of On Multimodality: New Media in Composition
Studies, winner of the 2015 CCCC Outstanding Book Award. Rhodes destabilizes the
Burkean parlor metaphor in order to argue for the serious play of queer theory as a
disruptive and potentially revolutionary act. What are the implications of queer theory
for research and writing in rhetoric and composition? Is queer theory at odds with our
best liberatory intentions?