Students find their voices in Open Mic at Café Moro

“There is no ‘usually’—that’s what I like about it,” says Linda Russo who coordinates Open Mic at Café Moro in Pullman with fellow English faculty member Donna Potts.

A community of people reading aloud from their own work or the work of others is what Open Mic is all about. The poems, stories, essays, and even music they present are often deeply personal and sometimes political. Open Mic is open to the public and happens once or twice monthly.  >>Watch the English student-produced video 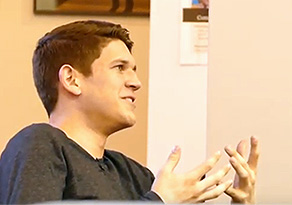 Creating a space for students to become their best selves is the goal of the Passport professional development and mentoring program. LeeAnn Hunter, clinical associate professor of English and self-described “artist, educator, and cultivator of citizens of the world,” designed the program to foster more direct professor–student interactions over multiple semesters, encouraging students to follow their own paths and to develop their voices so they are recognized.

“Students who feel supported, and who have a faculty member who believes in them and cares about them and their dreams, are twice as likely to report long-term professional well-being,” Hunter says. >>Watch the English student-produced video

Presented by the Department of English, the WSU Visiting Writer Series brings noted poets and writers of fiction and nonfiction to campus for creative readings, class visits, workshops, and collaborative exchanges across intellectual and artistic disciplines.

Clinical Assistant Professor of English Bryan Fry joined the editorial team in 2008 and established a student internship, which enables the journal to serve as an educational tool for students interested in editing and publishing. BOR interns and students in the English department’s editing and publishing track learn hands-on about the editorial process—from selecting work to reading proofs and editing for consistency.

The founders transferred the journal’s editorial operations to WSU in 2015 and continue to serve in an advisory capacity. BOR strives to carry out their original mission: “to create a home for emerging and established writers.” With the transition, Blood Orange Review sustains the support of WSU’s creative writing faculty, which includes 10 accomplished writers and editors. Fry currently serves as editor-in-chief.

Blood Orange Review’s inaugural literary contest this spring honored winners in each of three genres—fiction, nonfiction, and poetry—with awards of $500 each and publication of the authors’ work in the journal.

“A creative outlet for WSU students, a high-cultured flyswatter, a mag, a rag, late for dinner—call it anything you want. LandEscapes belongs to WSU. A gift.” This was how the late Boyd Benson, founding editor of LandEscapes, described it.

Each step of the journal’s publication process—from advertising to reviewing submissions to layouts and distribution—is run entirely by students from a variety of personal and academic backgrounds.

Editor this year is Madison Jackson, former editor of WSU’s student-run newspaper The Daily Evergreen. In April, the print version of LandEscapes 2019 was launched with a celebration at WSU Pullman, featuring readings by students and ice cream from Ferdinand’s Creamery. The online version is to be published soon.

Open Mic at the café