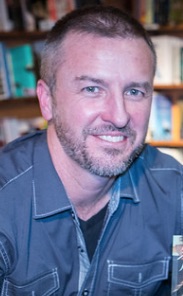 My teaching style is student-centered, and I support diversity and inclusion in my classes. I create a learning environment where students feel comfortable sharing ideas and participating. I facilitate students engaging with the tools and techniques related to the subject at hand—writing or teaching or literary analysis—then guide them to find the topics and angles they’re most passionate about. I challenge students by responding to the ideas in their work as a way of letting them know that I’m interested in the quality of their thinking as well as the mechanics of how they express themselves. I like to create a welcoming, rigorous classroom.

Jeff grew up in Denver and earned B.A. degrees in English writing and anthropology from the University of Colorado at Denver. His M.A. in International Studies from the University of Washington focused on Russian culture, where he analyzed images of Stalin in Soviet and Russian film. In 1997, he began to write fiction and published his first short story that year. In 2005, he received an M.F.A. in creative writing from the University of Idaho. His debut novel Love Give Us One Death appeared in 2016, and his debut story collection Bloodshot Stories appeared in 2018. His self-published handbook Writing for the Reader focuses on the practice of prose craft.