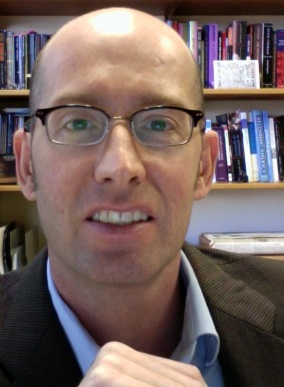 Kirk McAuley received his Ph.D. in British and American literature from the State University of New York, University at Buffalo in 2006. Since then he has taught in the Expository Writing Program at the University of Oklahoma, and the Division of Humanities at New College (the honors college) of Florida. He joined the English Department at WSU in August 2008.

McAuley is the recipient of a Fulbright Scholarship at the National Library of Scotland in Edinburgh, UK (2015 – 2016), and he was a Research Fellow at the Robert H. Smith International Center for Jefferson Studies in Charlottesville, VA (May 2011). McAuley received an ASECS-Keough Naughton Institute for Irish Studies Summer Fellowship at the University of Notre Dame in 2018, and he is currently the Lawrence Ruff Visiting Chair in Eighteenth-Century Studies (Fall 2019) at the University of Dayton.

Drawing upon archival materials gathered during a UK Fulbright Scholarship at the National Library of Scotland, and several prior grant-funded trips to the National Library of Jamaica and American Antiquarian Society, McAuley’s current book project advances our understanding of the historical and literary legacy of contemporary ecological crises through close investigation of the interfaces of nature and culture in texts composed mainly by Scottish authors residing at the so-called ‘outer limits’ of the British Empire: the Caribbean, Africa, and the South Pacific. Because the Empire was built around the global transfer of animals and plants, McAuley offers biotic readings of this literature, in order to highlight the human place in nature, as well as to provide practical literary examples of the ways in which, as Margaret Cohen suggests, oceans ‘knot together’ both geographical spaces and timelines.

McAuley’s first book, Print Technology in Scotland and America, 1740–1800(Lewisburg, PA: Bucknell University Press, 2013), investigates the mediation of popular-political culture in Scotland and America, from the transatlantic religious revivals known as the Great Awakening to the U.S. presidential election of 1800. In it, he reveals how seemingly disparate events, including journalism and literary forgery, were important deployments of print not as a liberation technology, but as a mediator of political tensions. McAuley completed this project with the generous support of the Robert H. Smith International Center for Jefferson Studies in Charlottesville, VA. The book was published in Bucknell University Press’s Transits: Literature, Thought, and Culture, 1650–1850 series, which “seeks to provide transformative readings of the literary, cultural, and historical interconnections between Britain, Europe, the Far East, Oceania, and the Americas in the long eighteenth century, and as they extend down to the present time.”

“‘What’s Love Got To Do With It?’: Sympathy, Antipathy, and the Unsettling of Colonial American History in Film,” A Companion to Historical Film, edited by Constantin Parvulescu and Robert A. Rosenstone (Oxford: Wiley-Blackwell Publishing, 2013), 513 – 539.