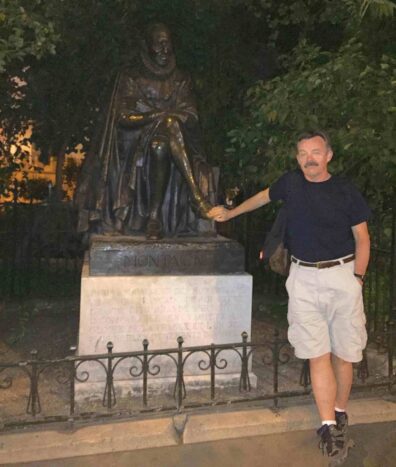 Prof. Hanly joined the Faculty at Washington State in 1991. He teaches graduate and undergraduate classes in medieval and Renaissance European literature and culture, including Old English, Chaucer, and Humanities from the Ancient World through the 17th century.  In 2008, he was awarded the “Best Seminar Award” by the English Graduate Organization for his course on Medieval English Drama.

Hanly’s work has been supported by a number of prestigious awards. His research in Paris in 2010-2011 was supported by a Sabbatical Fellowship from the American Philosophical Society; he was awarded but declined a Fellowship from the American Council of Learned Societies for the same period. He has also held two Fulbright “Senior Scholar” Research Grants (France, 1993-1994; Italy, 1997-1998), and a Fellowship from the National Endowment for the Humanities (1993-1994). He was honored with the English Department’s Lewis and Stella Buchanan Distinguished Professorship as an Associate Professor in 1997-2000, and at the Full Professor rank from 2011-2013.

Hanly has published articles in Traditio, Romania, Viator, Multilingua, and in the Blackwell Companion to Chaucer; his 2000 chapter on “France” in that volume has been completely revised for publication in a new edition (2017).  His first book, Boccaccio, Beauvau, Chaucer (Norman, OK: Pilgrim Books, 1990) studied Chaucer’s use of French translations; his second book, a critical edition and translation of a reformist poem from 1398, appeared in 2005: Medieval Muslims, Christians, and Jews in Dialogue: the Apparicion maistre Jehan de Meun of Honorat Bovet (Tempe, AZ: Medieval and Renaissance Texts and Studies). Most recently he has published in scholarly collections on the Great Schism of the West, on the French author and political figure Philippe de Mézières, and on a late-fourteenth century French illuminated manuscript associated with Mézières’s circle.

Prof. Hanly is completing a book investigating the role of writings by international courtiers in the political sphere of late-fourteenth-century Europe, with a focus on these writers’ responses to the prospect of war between Christianity and Islam.  He collaborates with French colleagues in the Laboratoire de médiévistique occidentale de Paris, a medieval humanities research unit of the CNRS (Centre national de la recherche scientifique).  Hanly has a special interest in paleography and manuscript research, and has worked at the Vatican Library and Archives, the Archives Nationales and Bibliothèque Nationale in Paris, the Burgerbibliothek in Bern, the British Library and Public Record Office in London, and in a number of European local archives and libraries.  He is also active in the Medieval Association of the Pacific, the largest regional society of medieval scholars, and recently completed a two-year term as its President (2014-2016).